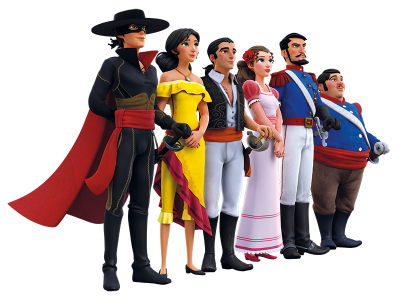 He is probably the most multi-dimensional character in the pantheon of super heroes. He represented action, romance, humor and heroism. Zorro is an icon, with four generations of fans around the world.

The famous, masked hero who fights with his sword and black horse named Tornado, against injustice. Since 1919 Zorro is known of comics, films and TV series. With his sword he scratches in three quick moves a "Z" at the site of action. Behind the mask of the hero lurks a man who in reality is a rich nobleman named Don Diego de la Vega. No one knows this secret except his father and his mute servant Bernardo.

Zorro, the mysterious, smart, agile and most strategic hero speaks to everyone. Young and old followed for decades the adventures of Zorro. There have been countless books and comics published, starring Zorro, he plays a central role in computer games, and he has his own musical, which will run on Broadway in 2015. Currently there is a new TV series in production (Zorro: The Chronicles) and they are working on a new film .. Zorro is back again!